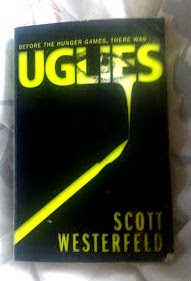 What?? Something not Swedish or about World war 2?? I know right! I heard about this first through Carrie Fletcher. I was actually looking to see if there were any John Green books in the library hence I was in the Young Adult section and I've read The Hunger games (all three in four days thank you very much) and I thought it would be a good aul read.

This story follows the life of Tally approximately 300 years in the future. Everyone is born "ugly" and from the ages of 12-16 are sent to dorms where they all regularly mock each other and call each other names, on your 16th Birthday you are brought to hospital and made "pretty". If your eyes were too far apart or your forehead too large, this was all solved, you are even given new skin.

All of Tallys friends have been made pretty so as she is waiting to become pretty she meets Shay who doesn't seem to believe Tally is ugly and questions the benefits of becoming "pretty". Shay disappears before her 16th Birthday and Tally has to find her or she will never be allowed have the surgery.

This was a Young adult book, so I flew through it (I had it finished in one) but it is a must read for anyone particularly 12-16 year olds, there is nothing particularly graphic or anything like that. The book demonstrates that if people continuosuly are exposed to a "perfect" image they should aspire to they believe it, it shows the power of continuous off hand comments affect people. This is the first of three books (the sequels are called Pretties and Specials) and I am looking forward to reading them

Lit Nit Wit; The Girl who Saved The King of Sweden 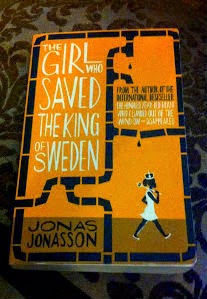 I think at this stage I have to admit I have an addiction............to Swedish authors...particularly Jonas Jonasson. One of the things I'm most happy about this year is the fact I've read more in this year than in the last 5/6 years, yay!! Now to the book

This book follows the story of Nombeko (I called her November if I'm completely honest....) through her life as a Latrine emptier manager in South Africa as a 12 year old, through being hit by a car and having to work for the driver of said car for the damages she caused to said car, the driver also happens to be an incompetent engineer responsible for something major, oh and by the way Nombeko is a mathematical genius and basically does her bosses job as she cleans. How does she end up saving the King of Sweden you ask, well its a long story, in fact this story follows her basically her whole life. What was interesting was the mention of the politicians in power at the time of the story. i.e. when Nombeko is working as a cleaner B.J Vorster is the prime minister of south Africa and Jonasson writes about Vorsters opinions on things such as Mandela (he considered Mandela a terrorist) and about apartheid (in the bible there is a passage where man try to build a tower to heaven  so god decides to create different languages and separates the men, and that was how Vorster advocates apartheid) which I found very insightful.

These Swedish books do not disappoint, perhaps there is a tad bit TOO  much political references, but overall I found this book funny and at times absolutely gripping. definitely a good holiday read if you are heading on one soon.

Have you any book recommendations??
Posted by Unknown at 06:00 No comments:

Email ThisBlogThis!Share to TwitterShare to FacebookShare to Pinterest
Labels: Jonas Jonasson, Lit Nit Wit, The Girl who Saved the King of Sweden 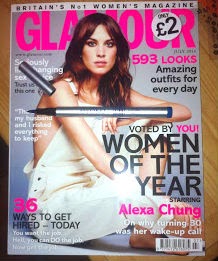 I love Glamour magazine, and I buy and hoard them religiously. And they give lovely samples.
It was through a sample of Bad Gal Mascara from Glamour that started my love of Benefit! In this months magazine a full-size of Eyeko eyeliner in the choice of black or navy is provided  which was incidentally on my to buy list. I chose the navy just for a change and I'm digging it, less severe than the black in summer! 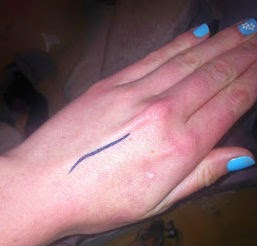 Is there any other magazines I should get for samples?? 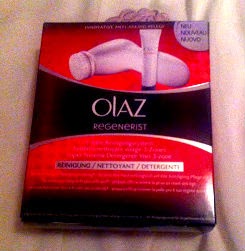 When I turned 21 I bought the Clarisonic Mia in blue and it is a fact I am immensely happy with even with the fact my mother didn't talk to me properly for two days after because of the cost, but I digress, I never had bad skin as a teenager but my Mia was such a good investment especially at the sides of my nose and when my chin got hormonal. After one to many drops in the shower though my poor Mia died a sad death and my skin and I were in bits!

A few weeks ago the sides of my nose were being particularly red and sore and I decided it was time I purchased a new facial brush, the only problem being I couldn't justify getting another Mia, unfortunately, so instead I headed to one of my new favourite sites Amazon (someone is very late to the party I know) and looked to see what had good reviews and didn't cost an arm and a leg. In walks in the Regenerist face brush by Olaz (the german version of Olay) and I knew I had chosen a good one. 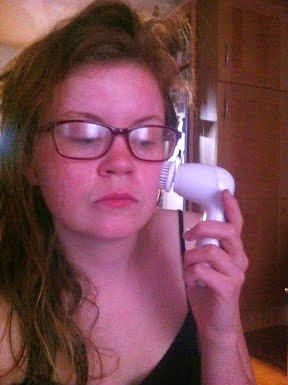 Unlike the Clarisonic, this comes with a AA battery so I wouldn't bring this into the shower and it also does not turn off after a specific time, I don't go over a minute, I don't want to overwash my face. On the plus it has two speed settings and the side of my nose doesn't look like its been sandpapered!! I use it with both my lush and La Roche Posay cleanser and actually it comes with a sample of an Olaz cleanser aswell.

Lit Nit Wit: The Little Old Lady who Broke all the Rules

Is it just me or does this book design look verrrry like the book design of The 100 who climbed out of the window and ran away?? They were both written by swedish authors... 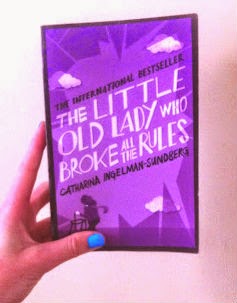 Anyways..... This story follows 79 year old Martha and her four friends and fellow residents of Diamond House Residential home. They have decided that their treatment in the home (due to cutbacks, the meals aren't fresh and the gym is closed to residents). They come to the conclusion they would be better cared for in prison compared to where they are now, and create a plan to work out how to get there! They want to show they are not old coots who do nothing but knit, or what ever they are expected to do.

Right to avoid being TOO spoilery I did like this book, being honest which I never thought I'd say its a bit quick at the start, by about page 7 everyone has been convinced that carrying out this plan is a good idea, I'd like to think it would take a little while to convince me to go to prison, even if it was with all my friends.

I work with old people frequently who are often unwell so its reassuring to read about old people who still have sense of adventure!! Swedish authors are just cranking out some good stories at the moment!
Posted by Unknown at 05:00 No comments:

Email ThisBlogThis!Share to TwitterShare to FacebookShare to Pinterest
Labels: Lit Nit Wit, The Little old Lady who broke all the rules

Nars Orgasm is finally mine!!

I love Jennies' blog, she is really lovely, and always replies to comments and tweets and her blog is just so cute. She announced she was having a blog sale I just knew I'd have to have a look! 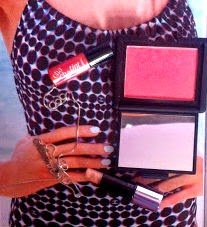 The thing that stuck my eye was the Nars Orgasm (I have been positively swooning over it, especially since I tried it on in France, positively almost cried when I couldn't go home with it) Nars Orgasm is a peachy pink with a hint of shimmer. The term cult classic is thrown  around quite a bit, but this is a bonafide Cult Classic!

I emailed her lickity split asking if I'd be able to buy it. She sent it along with two lovely samples, a Benefits Watts Up (A lovely Highlighter) and a sample of Cha Cha tint (A mango lip and cheek tint). 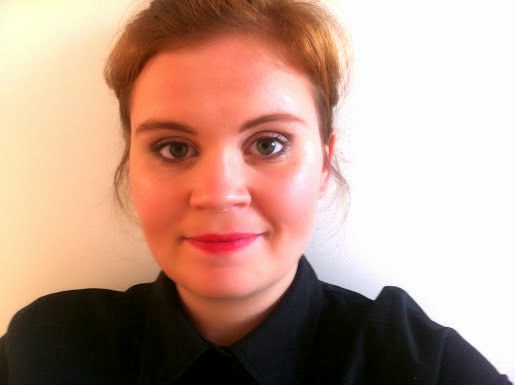 When they arrived I was actually so excited I tried them all on immediately. I applied the blush with one of  my new brush (the angled face brush) I blended the highlight in a C shape from the top of my cheekbone to the top of my eyebrow. I applied the tint to my lips, took two layers to get a nice flush of colour

Oh they are all so pretty. I can see why its high in demand!! A lovely investment, for something I'm going to use again and again.

So quite a lot of people have hopped on the gluten free diet bandwagon. I myself thought I was intolerent for absolutely ages, but it turned out it was just I was so stressed my stomach was actually in knots and that was actually my problem... Fun times. I think theres a video going round, where people on gluten free diets are asked what gluten is, and they had no idea what it is...(its the part of wheat, that gives the chewy texture FYI). But I have been watching what I eat and I thought having some more gluten free things would do me no harm! Also it turns out I don't eat enough protein so that's a thing I need to do.... I am getting back into running after a 7 weeks of injury......and the big thing after exercising is getting your protein in, I got the idea to have some banana and egg pancakes after watching Amelia Lianas Video. I just googled banana egg pancakes and I found this blog post, which gives the ingredients and directions and all that jazz. I used nutmeg instead of cinnamon and it was really easy to make and cook and of course super delish 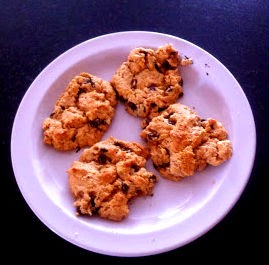 All my likes on Tumblr are recipes and I mean ALL of them!! I was looking through it some time in the last week and I refound a recipe for Gluten Free Cookies! I am proud of past life Niamh for saving that recipe for later. I couldn't get the peanut butter recommended in the video but I think they turned out pretty well. I have attempted to make normal cookies and these ones turned out much better! My brother is a picky eater and he had no idea it was gluten free and did not realise the main ingredient was peanut butter!


Have you any lovely gluten free treats???
Posted by Unknown at 06:30 No comments: