What I got in Lush recently 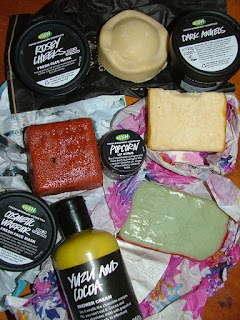 This year before Christmas I went to London mostly to see the Munster-Leister match (let's not talk about it) and while we were in London, my brother and father went to The Winter Wonderland (I wasn't allowed in cause I had an open bottle of JD in my bag...) after we walked to Oxford street and I happened upon the Lush on Oxford street and could not be dragged away from the place. Also my lovely housemates gave me some lovely products for my birthday ( I arrived home after a few drinks and saw the bag and I was so so so drunkenly thrilled.

I think Ill mention what I got for my Birthday from my housemates first.

Popcorn Lip Scrub: This is an amazing lip scrub, simply wet your finger and scrub against your lips, only the smallest amount needed. I love licking my lips after and getting a taste of sweet and salty, remember to apply a lip balm after.

Rosy Cheeks; This is a fresh cleansing  mask with calamine powder, I'll be honest in saying it's not my favourite mask but I'm still using it and utterly appreciate my housemates for getting it (It's in one of those Bring back 5 get a fresh mask pots so really its a win win).

Dream Cream: I get dry hands, from washing my hands so much at work. I keep this pot beside my bed, so I can apply it while I'm watching Netflix, there are a lot of oils involved and it takes work to get it to sink in but its phenomenal. You can use it all over but I just keep it to my hands.

Right so London; I have never seen so many good looking nice people working in one shop before and of course it smells amazing. There was two main reasons I went to get, the navy lipstick that I saw Abbey Williamson has and I wanted The Comforter, as I've only ever had Rose Jam and everyone talks about how much they love The Comforter. The first thing I went for was the lipstick, its called Secure, I'm fairly sure is a Oxford street exclusive, a lovely french assistant person came over and we went through them and I swatched a few and got it. I started looking for The Comforter and again my lovely lush friend ( I kinda want to marry him) came over again and I said I was looking for The Comforter, and he showed me where the bottle was, and he washed my hand with it and I nearly died of happiness, he also actually recommended that I try the Yuzu and Cocoa shower gel which is a moisturising shower gel and sometimes (nearly all the time) I don't use body lotion enough, and double jobbing is the way to go.

When I had those two picked out, I started to wander around, to see what else caught my eye. I ended up near the hair things, and stumbled upon the avocado co-wash. Again there are so many people around helping, I asked about it, its 80% conditioner, 20% shampoo, I was interested to try it so I bought a chunk. I've used it a couple of times, yes I thought I was doing it wrong as it didn't froth up and I looked up reviews on youtube (it turns out that's a thing, don't know why I was surprised, I was also happy cause I realised it def wasn't supposed to).

The next thing I bought almost purely for the smell and it turned out I really like it. This beauty is Queen Bee. A hair honey to rub into your hair, the one thing I'll say is keep it not in a cold bathroom, as it can be hard and it makes it more difficult to melt it between your hands. Again I saw a review online and she raved about it.

I was in line all happy with my things and I realised there was one more product I wanted. Could I think of the name of it, no! Another of the most helpful people ever came over to help and it was established I wanted the rough and the smooth, the sugar body exfolliator. OH MY I'm in love, sometimes I forget to bring it into the shower, cause of course it will dissolve if left in shower, but its so good, its not scratchy, it feels like its really doing what its supposed to, if you were going to buy one thing I would say that

Recently I had five empty tubs and wanted to exchange them for a fresh face mask. My skin was and is still being a brat and my jaw line and neck and chin are having flare ups. I was recommended Cosmetic Warrior, its anti bacterial and I really enjoy it.
The last tub was a cleanser so of course I had to get a new one, I like trying a new one each time, to see which one I like the most, and my skin doesn't react to things, yet at least. This time I chose Dark Angels, which contains charcoal and is hence black, and I like it, its slightly exfolliaty, but nothing too harsh, and I don't use it to wash my face everyday so I haven't found it to be stripping

The last thing I got was a bit of an impulse buy, but I'm enjoying it anyway. The King of Skin is a solid moisturiser to be used in the shower,( I have this at my work house and the shower gel in my home house ). You rub it all over, at the end of the shower and then pat dry your skin to keep the product on your skin. I love it, I need moisture for my  AGING SKIN, ok  not really but I feel good when I do it

Right OK I had not heard about this book before the movie came out
I'm fairly sure. Before I read it I heard from Hank and John Greens Podcast that this was a book made to be a movie but I knew I wanted to read it before I saw it which I thought was interesting and actually made me want to read the book more (cause really I might never see it, I'm awful at seeing movies, I always say I'll watch more but I never do). It was put firmly on my Amazon wish list/ list of books for my brother to chose to buy me for Christmas ( I give a list he picks one, that way there is still some surprise Christmas morning) but then just as I was leaving the library with two other books (reviews to come) and there it was looking at me, I promptly borrowed it also, I was very excited as I did kinda want the other books on my wish list slightly more than this one.....and also if a book is being made into a movie, it usually is an alright book......mostly.

This book follows Mark Watney, a botanist/astronaut (yes the botanist side is important) who is mistakenly thought to have died on Mars, and so is left behind again ON MARS. Thankfully (stay with me on this) the trip to Mars was cut short so there are quite a few left over supplies and a lot of the mechanical things are working, except the communicator of course. A lot of the book is written in log form from Martins perspective. He's a funny man, he swears a lot for an astronaut, I'd probably swear a lot if I was left on Mars so it is understandable. I really liked his character, he explains everything he does (because he thinks he'll be dead by the time the log is found) and somehow has humour, he never blames the others for leaving, they were only following protocol after all, but he is forever looking at ways to do things, whether its trying to find a way to communicate with earth or ways of extending his food rations further (yes I have read the way he did it wouldn't work, this is not a how to survive in Mars handbook, it's fictional)

Without putting major spoilers in this, when it is discovered he is alive (not a major spoiler) the political aspect of his rescue I found very interesting and things lost and sacrificed for the greater good, the life of the botanist is more important than an entire countries glory I suppose.

I still haven't seen this movie but again I have heard that the science/engineering side of the book does carry over into the movie and the movie just won two Golden Globes for Best Movie and Best Actor. I would recommend this book, even with a science/ engineering/ botany jargon, it doesn't go over my head very much. I'm very glad I read it
Posted by Unknown at 07:24 No comments: