What's on my iPhone ? 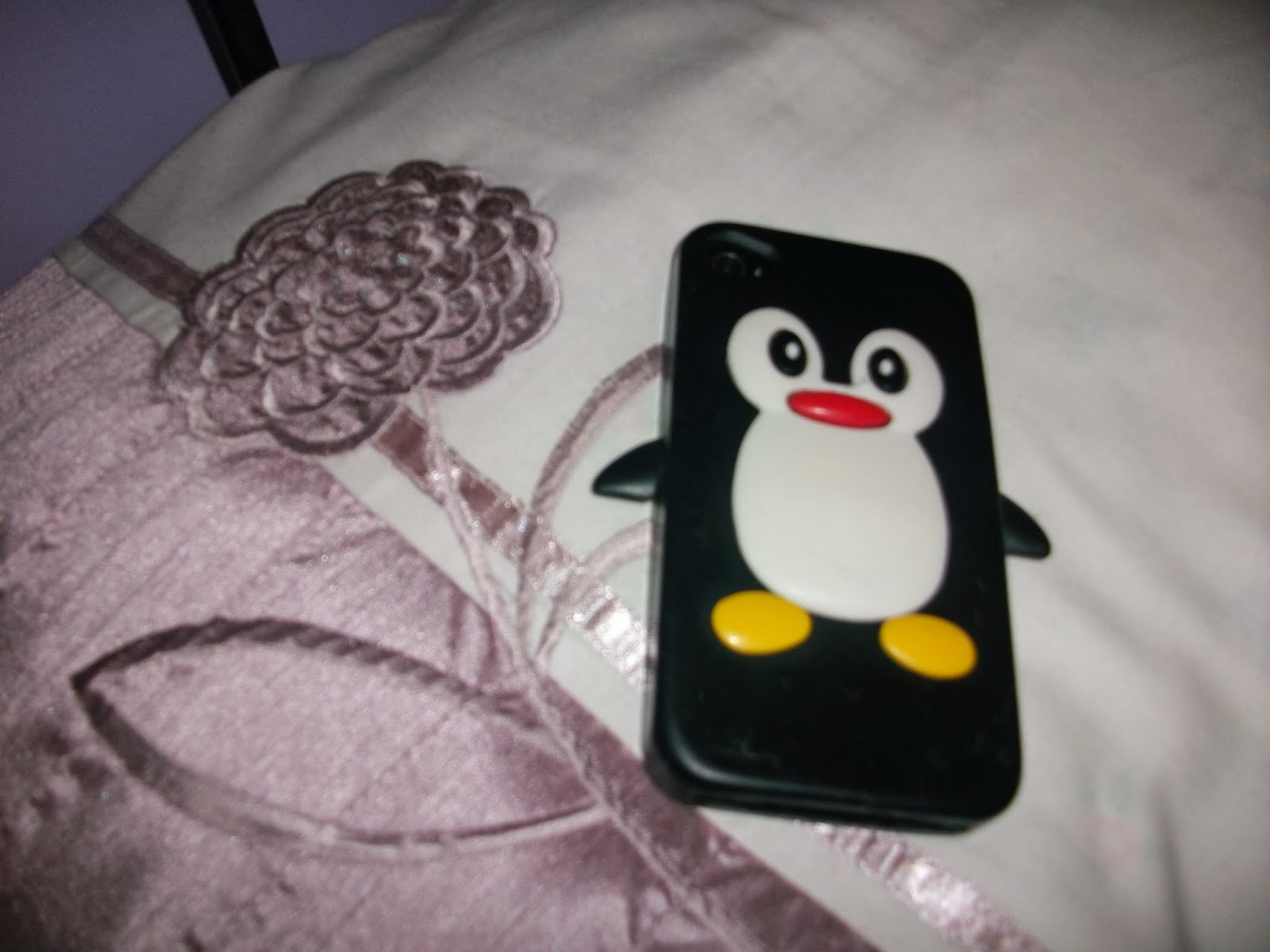 I am unashamedly an iPhone addict, if I don't know where it is I would almost get palpitations. It has my life on there and I went into the worst withdrawals around the time it needed to get its battery checked. (Best money I spent....ok not really but still). I wanted to show you my prized possession and some of the secrets it hides...

First of all my cover, yes its a penguin and no the wings do not annoy me (they have ripped a small bit but they're still hanging on). Its a rubber case, which is great for when i drop it and have mini  heart attacks. I get slightly worried everytime I don't have it in a case and don't understand how people can have iPhones and not have some kind of case! Im not the only one sporting this (super cheap btw ) case. Whitney Port of  'The City' fame instagrammed this pic fairly recently showing off her new tattoo and simply adorable case.

I'm always very interested as to what people have as their   background photos, significant others pets themselves etc as I think it says quite a bit about themselves.Mine happen to me Benedict Cumberbatch on the cover of Time magazine and Mickey Mouse with an afro, I'm not precisely sure what that says about me other than I am a part of the Cumberbatch Collective......

I have my phone fairly organised. The first folder is where I have stashed all the apps that I never use but cant delete (the stock app, and facetime and passbook for example) then a folder with the apps I use occasionally (settings, calculator) then I have all my other apps colour coordinated kinda.
As you can see I have a few social media apps (Tumblr, Facebook, Twitter and Google plus) as well as my two running apps, The Runtastic has replaced Runkeeper but really I think they are both as good as each other. I'm continue to learn French with Duolingo and though it's getting more difficult I'm sticking to it. Then finally are my two guilty pleasures Tinder and Hay Day, which I have spend far too much time on but they both make me giggle.                                                       My phone is only a tiny 8mgs so I keep the apps to a minimum and this way I only have apps I actually use.

p.s The Google Plus Auto Save function is actually a life saver because you can see all your photos online and the Auto Awesome is a fun little extra to look at.

whats your fave app??
Posted by Unknown at 11:47 No comments:

I spend a lot of time wandering around the beauty area in Debenhams and particularly around the Benefit area and on one recent visit the lady who was working there asked would I like to try the new Lollitint, Ive heard great things about it online so I jumped at the chance.

first she applied the potent eye cream (this was the day I bought the kit, which I'm really loving) and she applied they They're Real (which has been on my lust list since I first tried it out) she applied only one or two dots to my cheeks and then blended in until it gave a lovely glow and applied some to the lips too. She told me she was wearing about four layers on her lips and they did look really vibrant so it is really buildable. On me it was just a hint of pink which was just perfect and it didn't feel too drying

I love getting my make up done at those places! Heres the finished result

Keira from A Pretty Penny used a big long list of words to tell her audience about how she's feeling, what's she's loving and generally how she's getting on and I thought I'd borrow the list and answer some of them too.

Making : Decisions so I'll have more things to do
Cooking : More and more, not just using packets, trying Sorted Food for more ideas
Drinking : More water because I know I'm so dehydrated :/
Reading: Half of a Yellow Sun, Lit Nit Wit to follow when finished, enjoying it :)
Wanting: More good weather after ALL the rain we've had the last two weeks.

Looking: Forward to doing more new things this week (IT stuff FTW)
Playing: Hay Day unashamedly far far too much.
Enjoying: Zombies, run. Prepping for the apocalypse.... or just running cause I love Choclate
Wondering: What is going to happen in the next few months, a lot of possibilities!
Loving: I've started knitting again, don't know what I'm making but I am doing it
Wearing: my varsity jacket and admitting I bought it to look like Sulley
Giggling: At my brother "Is rubbing alcohol, when you give a beer bottle a massage"

Ps.  I've tried my face mask and I love it, only wear it for about 5 minutes because the lemon-juice can be harsh, I used the Benefit's emulsion after. It makes my face feel amazing!!

Email ThisBlogThis!Share to TwitterShare to FacebookShare to Pinterest
Labels: show and tell

I love Benefit, and I love Love their Kits. I spend more time looking up and researching their kits than I with any other brand. After getting my make up done at the Benefit counter in Debenhams and having the It's Potent cream applied ( a Rachel Whitehurst Holy grail as far I know) and it felt so good on my skin, I felt as of my under-eye skin would appreciate some TLC, but I also wanted to try the other things in the range.
The entire Kit only cost €16 so I really had no choice but to buy it.... that's my story and I'm sticking to it...

I am most looking forward to using the eye cream and the toning lotion having just used up my sample of the Clarins toner. I think a kit like this is really useful if you're interested in a Brand or a product but don't want to buy it if you're not sure if it'll agree with your skin.

Did I mention how lovely they all smell,and  the packaging is just dotey, my bathroom has never looked classier. You can buy the kit here

Have you ever used Benefit Skin Care. whats in your go to skin care kit??

On My Face: Cinema

As I think I said already in a previous blog my lovely friend Sarah is upping sticks and moving to Dublin.
We are third generation friends and have known each other our whole lives, so I am very excited for her and her move. I can hear the Dublin Nightlife calling our names already... :)

Last weekend she asked would we go to the cinema and of course I jumped at the chance. My town doesn't even have a cinema anymore so off we trotted 25 minutes away to go see Wolf of Wall Street
(quickie review: was highly entertaining and I've never heard an entire cinema laugh so much during one particular scene, don't know if there's an Oscar for Mr Dicaprio though)

So this is what I had on my face

I then applied Bourjois Little Round Pot Cream blush in Nude velvet. I like to apply this with my ring finger.

I swept Bourjois Paris Color Edition 24h eyeshadow  in Or Desir all over my lid.

I lined the bottom of my eyes with Urban Decays Psychedelic Sister for a bit of a change and then used my No 7 Extreme Length Waterproof Mascara (Brown Black).
Finally I dusted my face with a face powder from Maybelline which has been discontinued, and my nude Gosh lipgloss which I have had forever.

So that was my Friday night. It was lovely hanging out with my lovely friend while she still lives nearby
Posted by Unknown at 11:55 No comments:

Email ThisBlogThis!Share to TwitterShare to FacebookShare to Pinterest
Labels: 17, bbloggers, Bourjois, gosh, Make up, Maybelline, On my face, Wolf on Wall Street

Over the past couple of weeks I've been quite bold. I've just been ignoring my faces' needs, not cleaning it properly and also the weather has gotten colder and stormier and my face has declared WAR and its in a not great way! As a big apology to my poor skin I headed to the kitchen and made not 1, not 2 but THREE DIY skin treatments as I slap myself on the wrist and remind myself my skin aint getting any younger!

The first treatment was a lip scrub I made was based on Essie Buttons DIY lip scrub.
My mother bought a tub of coconut oil and used it once so I helped myself to it
The consistency was not what I expected so I had to heat it and then I also added Olive oil to the recipe.
I most definitely did not taste and love it........

I had noticed the sides of my face were getting particularly dry and had no face scrub handy so the next thing I made was the Coconut Oil Lemon and Sugar scrub . Again I heated the coconut oil and added some olive oil. When it was first made I was a bit worried about the consistency but it hardened back up and it smells so good!

I have only in the last few days finished my last Honey, Nutmeg and Cinnamon facemask so I was browsing and saw a Avocado facemask! I figured with all that natural oil and it tasting so yummy there's no way its not gonna be good for my face. I only used half and avocado and then added the other ingredients by eye to get to the consistency needed. I used half the avocado because:
A- with a fresh ingredient like avocado it wont last very long and
B- I like eating em so much I couldnt bear making it all inedible.

I will report back with feelings on them after I've used them a few times. They all look good enough to eat though :)