Sometimes I hate it when I say, ' Oh I listen to podcasts', when I'm chatting to people about what I do in my spare time or whatever, but I love them. The best thing I like about podcasts, you can walk around with them and learn or laugh, as you're going to work or stretching your legs, making dinner and so on, there's always something new listen to, particularly if you're like me and are subscribed to 34 podcasts, I just counted that myself and am kinda in shock myself. Whatever kind of thing you want to listen to, you can find something you like, whether its comedy, fictional, pop culture, sex, having children (I'm not broody, but..I'm preparing......) and the human condition.

There's such a mix, and so much to listen too, and while there are ads, you get over that, and if you don't like to hear a certain interview on nerdist or bulleye, you just don't download it. If you get over a podcast, which does happen, you just remove it from your feed, it's no problem. The worst thing that can happen is that the podcasts can finish up, which is slightly heart breaking, looking at you The message. I'm going to try and break it down into categories, and say why I like them.

SEX AND RELATIONSHIPS;
The last time I wrote about Podcasts, I think I mentioned Dan Savage and his Love Cast. I have to say, this is something that is shaping my mindset on relationships, monogamy and sex in general.
Sometimes I put off listening to him sometimes, just because sometimes there's so much to take in, but everytime I do I get so much info, I'm glad I heard it and am developing my thoughts on sex work and break ups and relationships.

Another sex positive podcast I started listening to recently is Sex with Emily. I think her approach is more casual, and it is good I've already listened to Dan for a long time. Her's is more of an easier listening. What I love is when I hear a question, and I hear the answers and it was exactly what I thought.

FEMINIST PODCASTS
If you didn't know I have an obsession with Louise O'Neill, not quite in a stalker way, but anytime she mentions she's written something or has been interviewed, I'll try and read it ASAP. I think she must have mentioned The Irish Times Womens Podcast, and so of course subscribed immediately.
For some reason I have been pleasantly surprised about how well spoken and smart these irish journalists, and politicians and just fabulous women with amazing opinions on a diverse range of topics.

Another person who I stalk online is Gala Darling and any time she mentions she's been interviewed by someone for a podcast I end up subscribing to it and really liking the stuff discussed
The podcasts I've ended up following are
Stay Real With Amber
Punk Rock Personal Development and
The Lively Show
These three podcasts have a common thread in them in my opinion. All of them try and helping people to empower youself.
The lively show and PRPD interview women, such as bloggers, (The Lively show) authors, burlesque dancers (PRPD) about their lives and the hustle basically. To hear how these people got to where they are, even though that's not the career path I want, is really interesting, and I feel like I could take some of the life lessons discussed in the podcasts. Hearing empowered women is empowering!
I've only just been introduced to Stay Real with Amber, and I've only listened to the first one, but I have high hopes.

I thought I'd be able to write about all the podcasts in one go, turns out no I cannot. Gives me something other than books to write about I suppose.
Come again and I'll discuss Science Fiction and pop culture :) 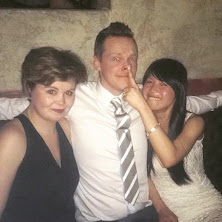 This week I was going to review Brooklyn, but
1 I'm reviewing too many books, in my opinion anyway

2 I really didn't like the book. I was just about getting by until the sex scene, then I lost it completely

3 I did something this week I'm so happy with.

My love life is not exactly the most fairy tale like story you've ever heard, there's been some unrequited "love", several times feelings with people who were unavailable, both emotionally and actually, yes I know, I'm terrible. I have had the grand total of one boyfriend, which officially didn't last that long, but all in all it was just short of a year. It didn't end badly, at all, just distance and moving on, no bad feelings, in fact after we finished I brought him to my graduation ball and stayed at his new place, to watch my mother do a marathon. It was funny we were still texting, and he started mentioning one of his new housemates, and I just knew they would end up dating, and I was right. I knew when she checked them in at a park late last year saying how happy she was they'd gotten engaged. I was legitimately happy for them, and I decided I'd really like to go to it, though I haven't spoken to him in a long time, not in a bad way or anything like that, people have lives to live after all.

I'm not saying I believe in the secret, or even know anything about it, but I will say I think the fact that I said I'll get invited, I'll get invited, helped get me invited. Also I sent him a message New Years Eve, totally nice, totally about Jessica Jones. I enjoyed talking to him after quite a long time, just a normal chat. We were good friends for a long time, a time that was really tough for me and he was there, with bourbon and pizza and he really helped me deal with stuff.


So a couple of weeks ago, I was in a pub discussing why I loved Bernie Sanders and explaining the cycle of crime in america to my old bar manager, and I get a notification on facebook, saying I was invited to wedding drinks a couple of weeks later. I'd had a couple of drinks at this stage so got on the facebook message, asking my friend to go, and ensuring my friend would be allowed to come, and I was told it would be no problem.

So this year is a centenary of the 1916 rising in Ireland and there are a lot of things happening in Dublin to commemorate it and since I was in Dublin for the day, so I wanted to do something. I decided I wanted to do the walking tour. I studied History in school, but a bit of a refresher would do me no harm. I really enjoyed it, to walk around the city where most of the fighting happened and seeing bullet holes in statues you've walked past dozens of times.

After a quick frantic trip to ikea to find a frame for the present I had gotten I arrived at my friends house, to hear her Boyfriend had had his final inspection at his school and was officially dipped as a teacher. They wanted to meet before we went to the wedding, but I assured them that he should come with us. So we headed to the porterhouse by Trinity for a couple drinks, I had a Galway IPA, which was lovely. Then we headed to Xico where the party being held.When we got to the bar, I saw the groom (well his back) and for a second I got slightly scared, but it helped my two friends were with me, so I ordered the drinks and we sat at a table away from the party for a while. I psyched myself up and went over to him, and tapped him on the shoulder, and it was honestly like I'd seen him last week, not the two years it had been.

I wont go too into the party, I spoke to his father, who had to be told later who I was so he came back and was way more friendly, I met the bride, who I'd never met before. She told me she'd heard all about me, which unnerved me slightly but she seemed happy to see me, so I think she's heard good things. My friends and the bride and groom got on really well, I thought of some appropriate for wedding stories about myself and the groom, it was all so so so fun.

Before I went to the wedding people seriously questioned why I was going and would it not be awkward, to see someone you really liked happy with someone else. To see someone you've seen naked planning on spending the rest of their lives with someone else, who turns out I really liked.
I listen to Dan Savages' podcast, and I remember he said that a relationship doesn't have to last years and end in marriage. The year I was with him, was the worst year of my life, honestly, not cause of him obviously, but he literally dragged me through that with promises of bourbon and pizza.
Why wouldn't I want to be happy, I don't have the mindset that he shouldn't be happy if its not with me, it's not like I thought we'd end up long term together. They look really happy and I love that. I just checked facebook messenger and she's changed her name to his (I sent her a message the day after thanking her for the night)