As you know by now, my life is somewhat boring when I'm not travelling, I am heading to London next week though, I digress. Last week one of the absolute high lights was buying a Crock pot slow cooker, fun times in the LoC household! I don't think I'd even seen one in person before I bought it. When I mentioned it to a friend she reminded me Pinterest is a thing and it has an abundance of recipes for a slow cooker, (follow me on Pinterest here) 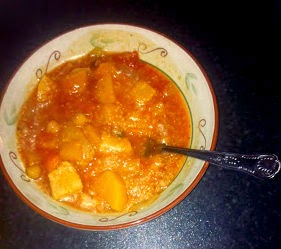 This week after a major Pinning marathon I had chosen a lovely looking Hearty chicken stew with butternut squash and quinoa recipe. Only after buying all the ingredients and half way through peeling a butternut squash for the first time did I realise this was not for a slow cooker at all. Genius!

So I had to change the cooking around a small bit, but it turned out edible and that's the most important thing to take out of it

First  peel and chop the Butternut Squash.
Steam it for 10 minutes and add it to the slow cooker
Brown the chicken and add that to the cooker.
Chop the onion and carrots and add
Add the canned veg (I didn't even drain the beans just added the whole thing)
Add rinsed quinoa and stock and Parsley
Cook for 4 hours on high or 6/8 on low

Ok by now looking at previous Lit Nit Wits, it's fairly obvious I have a thing for World War 2 era books, and also you know recently I was in Italy, but what did I forget to pack?? A book! Not exactly the worst thing in the world but then I needed one for the travelling and the queuing etc etc.

So I was in the Oxfam book shop in cork (its a lovely dainty shop and the selection has kept me happy so far) and I came across the book Guernica. Now I've heard of the Spanish dictator Franco, he's is often mentioned in the background of my WW2 books, but I've never sat down and read one that takes place in Spain, till now.

The books starts in the year 1939, the town of Guernica was attacked a few years before and we follow Justo Ansotegui around the market, he observes the men playing cards and the women complaining about the food in the market that they cannot afford anyway. It is clear all Justo has faced trauma and the war cost him dearly, he has only one arm and was once known as the strongest man in the area, all this is very intriguing as we wonder what has this man  and this town endured under Franco. These People are Basque something they are proud of, but it is evident they are not too profess this (my knowledge on the Basque people was limited when I started reading but the Author Dave Boling teaches enough that you have a better understanding as the book progresses without inundating the reader with information)

The book goes back in time to when Justo was a child and tells the story of him and his brothers, growing up, becoming men, what the two younger brothers do when they leave the farm whom they marry, then the story leans on the next generation of children and their lives. The feeling of close family bonds and love are prominent factors in this story and what people in the early 1900's did for entertainment and what they did to survive.

I am really not the best when it comes to reading attacks on people/towns etc (you'd think the opposite with the amount of books I read...but nope, its all fairly traumitising for me).
However Dave Boling does do a remarkable job, it the best and worst way possible the visuals are remarkable and I did get a bit emotional in the Italian airport like an eejit, but anyway I felt he handled the writing of an actual event very well.

The next part of the story explains how people survive a trauma such as the attack on their town, dealing with what they have lost and how they will survive this.

Also the ending!! Oh the ending made me so so happy, it made up for the destroying of the town for me it was totally unexpected and usually I can totally see things coming.

Another interesting part of this book is Picasso is mentioned in the story sporadically. He actually painted an interpretation of the attack. It's not one of his most famous works to my knowledge but it is something to behold.

I think this is a great book and it caused me to really want to learn more about Franco and the war in Spain, which may be dwarfed by WW2. 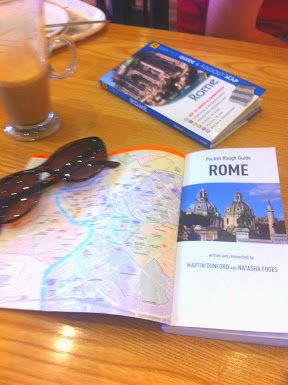 I immediately thought I was in trouble to be honest, but instead they asked me if I would go to Italy with
my brother, who was mad to go but wouldn't go alone. Of course I jumped at the chance to go

Getting and staying there:  The one thing about getting to Rome from Ireland is you have to go from Dublin. Our flight was at 6am so we traveled up the day before and stayed in The Abbey Court Hostel which is just off the main street, it has a Cinema room and a hammock room and it organises transport to the airport too which is handy. We flew into Ciampino airport which is about 35 minutes from the city, we took the bus there and we were able to walk to our hostel. We stayed in The Pop Inn Hostel which for location was amazing, not a lot of facilities compared to The Abbey Court, and there was a few small broken tiles in the bathroom (still in the shower unattached) but it was clean and had internet and all we did was sleep there. BTW: There is an accommodation tax in all of Italy that was 2 euro per person per night, so it cost us 12 and I believe that has increased since we left and it has to be paid in cash. 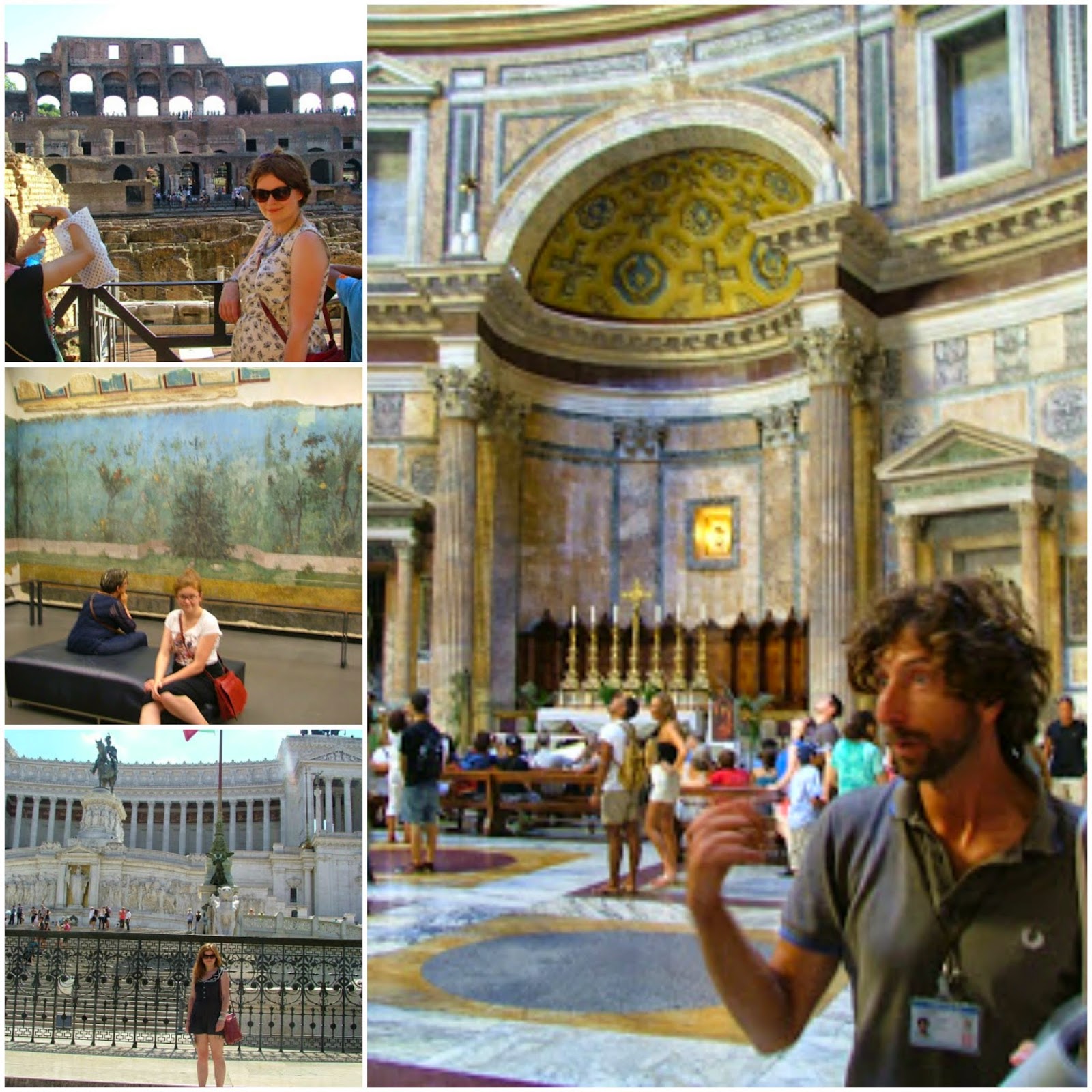 What we did: I am all about the bus tour, it gives you a feel for the place and a map and you see how to get around and the bus tour had a stop 2 minutes from the hostel so on we jumped. Compared to other cities I thought Rome was tint, in a good way, it meant lots of things were pretty much in walking distance.
On the first day we also headed into the Coliseum and BTW: If you are between 18-24 and have I.D you get into Coliseum for 7 compared to 12:50.
On The second day we went to The Victor Emmanuel 2 monument and took the lift to the top and there was the most lovely view you can see the Forum The Coliseum and St Peters Basilica. We took a tour of the Pantheon which was really interesting and informational and only cost 10. we ended up in a few random but utterly beautiful churches and museums. BTW  we headed to Palermo Turismo Catacombs and I wasn't allowed in as my knees were showing, I had a cardigan but still I wasn't allowed, and they don't have anything to cover you, in other churches and buildings like that they do provide shawls, but I learned to carry a scarf too for your legs. 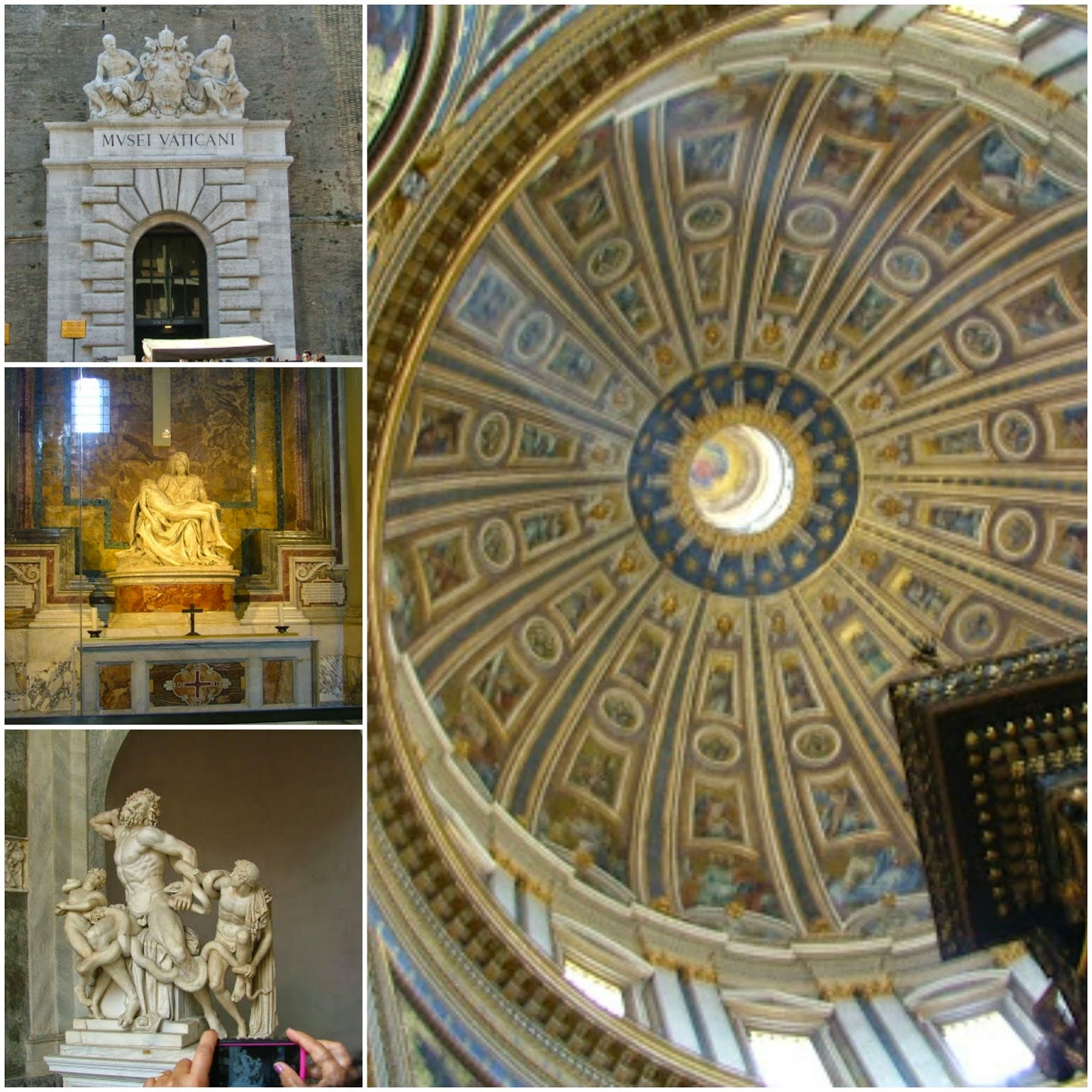 The Vatican:  The tour group at the Pantheon informed us they also did tours of The Vatican. It did cost us 45 (and those over 24 would pay 50) but we wouldn't have to queue at all which was something I wasn't looking forward to, so I felt it would be worth the money.There was about 25 of us on the tour and we were given ear pieces to hear what our lovely stereotypical Italian woman tour guide who gave us lots of info on statues and the map room and The Sistine chapel. We actually split from the group so we could see more areas such as the bust hall and The Raphael room and The Egyptian room. The Sistine chapel is a thing that everyone should see in their lifetimes!! If your neck doesn't hurt from looking up your'e not looking enough!
The Basicila is just a marvel to look at the whole church even (go to the Crypt too under the church if you can). supposedly it can seat 60,000 people!! The art in the whole place is staggering and I didn't even see half of it and we were there for about 5 hours. 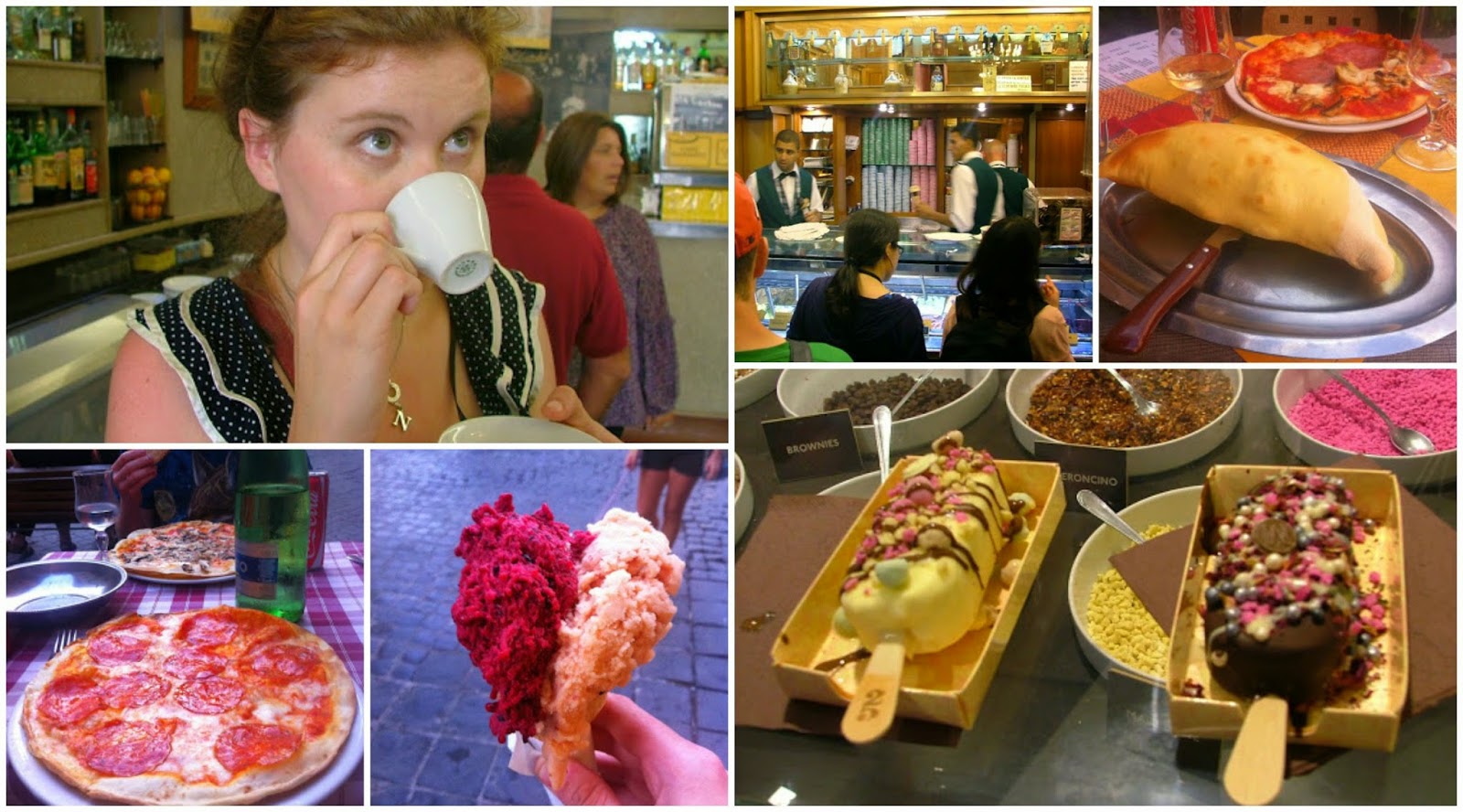 Food and Drink: Our First night I for some reason wanted to head to the Ghetto to see it (maybe because I had headed to the one in Paris). We ended up eating there too, but we got pizza, I don't think my brother would have appreciated Jewish food but I saw some of those Restaurants too. We also got Kosher Gelato (who knew that was a thing!) The second night we ate by the VE monument and that was a mistake, it was too touristy and the pasta wasn't great and it was more expensive and very MEH. The third day we ate early after The Vatican and again had Pizza. We walked a fair bit away from The Vatican so the price would be more reasonable price and I accidentally....ordered half a litre of wine at 3pm... I am a massive Coffee drinker, so finding a good coffee place was paramount on this trip. It was actually on The Pantheon Tour where the Tour Guide recommended Caffe Sant'Eustachio. I went there straight after the tour and ordered an Espresso......and then another one, it was unlike any coffee I've ever had. My brother even had some, he didn't exactly appreciate it but he's still drank coffee from a famous place. For gelato,the tour book we had mentioned Giolitti and it was in proximity of The Pantheon too, though it was kinda hard to find the gelato was just unbelievable.