My Favourite Soap and Glory Facemasks 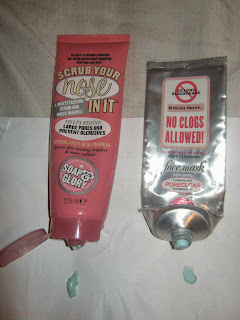 I've always been lucky with my skin. As a teenager I never had many breakouts or anything like that. my biggest problem has always been the sides of my nose are very dry and (ewww I know) but it can be like blackhead central. So in January 'Operation Blackhead' was commenced (Yes I did name it, judge away).  So off I headed to Boots (I do slightly adore the new huge one in Cork) and spotted 'No Clogs allowed' by my true love Soap and Glory.

I had never bought a proper face mask before this but knew from my obsession with you tube and beauty blogs it was the way to go. The mask has self heating abilitie and has little granules which are not too rough at all and are perfect for clearing out pores and sorting imperfections out. I used this 2-3 a  week and have only this week run out, a repurchase is on the cards. My only slight issue was that the packaging ripped, but when I called into Boots to make sure its still there, I saw  it was repackaged so hopefully that won't be an issue anymore.

Over the summer, I believed my 'No Clogs Allowed' was almost empty (how wrong I was) so I took this as an excuse to go on to Boots and see what other masks and face products were around. When I bought 'Scrub your Nose in it' I didn't actually realise it was a mask until I read the back of the tube. Now before I start describing this I do want to stress I do really like this scrub/mask, but it happens to smell and feel slightly.....like Cif, the cleaning product.... I was slightly worried the first time I used it, but then I looked in the mirror and my face did look well, results are results.

I am fairly lazy when it comes to skin care and things like that, so I do as much (in fact nearly all ) in the shower. I put a face mask, a hair mask ( currently using Herbal Essence Beautiful Ends) and then I use my Soap and Glory Clean on Me, which advises you to turn the shower off and when I'm done I rinse everything off and in my head I've saved time and its my routine.

If I had to pick between the two, I would choose No Clogs allowed (operation Blackhead has been a grand success as a result of it and my face never feels tight or red after)

What Soap and Glory Products are your Fave?

What I've Been Reading: 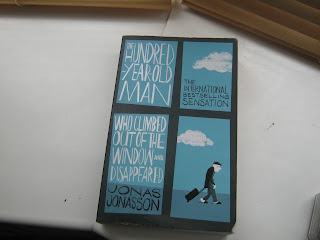 One dreary day on my day off in Cavan I walked into a lovely little bookshop and spotted this odd blue book that would not allow me leave the shop without me buying it, and I didn't regret it

On the day he turns 100 years old Allan Karlsson decides one more adventure is in order. And so in his slippers and hat he absconds from the residential home where he lives and heads towards the bus station.
When it is realised Allan has dissappered a country wide search for the lost man is commenced
In a series of flash backs we learn about Allans life and the places he has lives which include but are not limited to Sweden, Fascist Spain, Communist Russia, Korea the States and France. He also meets an array of famous idividuals such as Truman, Churchill and Stalin.

If I were to describe Allan I would say he is the Swedish Forrest Gump, with a touch more sarcasm and a touch more vodka. A  highly entertaining book that helped those four and a half hour bus trips from Cavan to Dundalk on a Friday night. Highly Recommended

My friend recently bought it as she thought it was by the same author who  wrote The Curious Incident of the Dog in  the Nighttime, as both the titles are long and slightly ridiculous.....

Have you read any good books lately?? 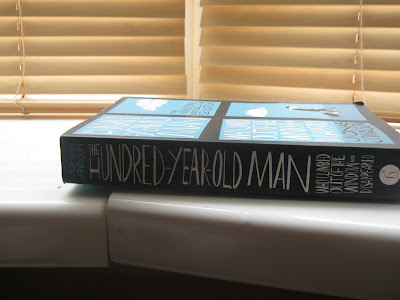 Email ThisBlogThis!Share to TwitterShare to FacebookShare to Pinterest
Labels: Books, Forrest Gump, The 100 year old man who climbed out of the window and ran away

The One and Only Tag 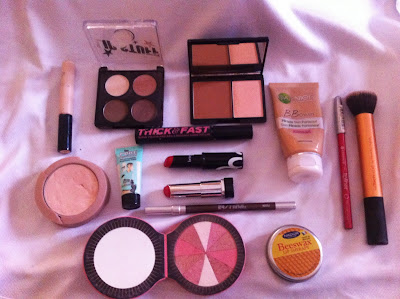 After seeing Jennie Mays'  version of the One and Only Tag I thought I'd give it a go. I thought it would be fun to examine my not so extensive make up collection and see what is it I really really like. 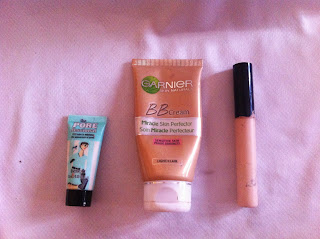 Primer:  Benefits Porefessional is the only one for me. As you can see its only a sample but it has lasted me so long and makes my make up go and on.

Base: I bought the Garnier BB Cream in January after a friends recommendation. I life the fact you can still see my freckles even after applying it. Its like my skin but better.

Concealer:  After reading approx a million blogs about this, I bought it at boots, and I can see what all the hype is about, it covers under-eyes, redness (I have just lovely red patches around my nose) and spots only vanish after a dot of it is applied. 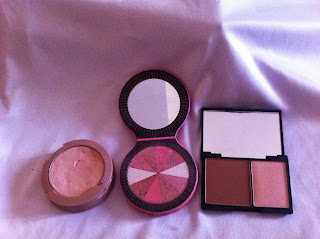 Powder: Maybeline Dream Matte Powder has been my go to powder the past few years. It can be a little cakey if applied heavy handedly so i try to concentrate on my Tzone and sometimes if I go OTT on the blush, this is good for toning the cheeks down.

Blush: One early dreary morning sitting in the car before work my friend popped Soap and Glorys 'Love at first blush' from her purse, it was a 'I've got to have it' kinda moment. You can swirl it altogether but I try to just use the pinks together and then use the shimmer as a highlight, it makes you look like you've put a lot of time and effort into your blush even if youre running out the door.

Bronzer/Highlight;  Last summer when I was in london I am not ashamed to say one of my top priorities was to buy at least one Sleek product. I had heard only lovely things about this duo. All you Beauty Bloggers were not lying when you were raving about this contour kit (mine is light btw). Only a tiny amount of the bronzer is needed on the brush to make cheekboneless me look much more cheeky. 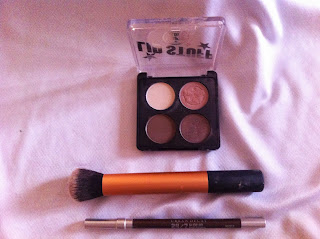 Make up Brush: On the same London trip I also had decided the Real Techniques Core Collection would also be mine. Even though you can buy these in Ireland, I felt it was cheaper to buy it in Sterling (it may just all be in my head though). All forms of foundation are easily blended and looks all natural and lovely.

Eyebrow/Eyeshadow: Soap and Glorys Lid Stuff in 'Whats Nude' is just the perfect everyday kit. Vanilla (Top Left) under the brow bone Pink T (Top Right) over the socket, and mudhoney and Aubersheen (bottom left and right respectively) in the outer eye. I also use mudhoney for my day eyebrow colour, its very natural looking and suits me down to the ground.

Eyeliner:  I must have been a good girl last year, because Santa gifted me Urban Decays Ocho Loco (eight gorgeous Eyeliners in one kit). Ignored far too much until recently is the dark brown 'Hustle'. I do Love perversion but black is just a small bit harsh on me for everyday wear, so Hustle is my go to. 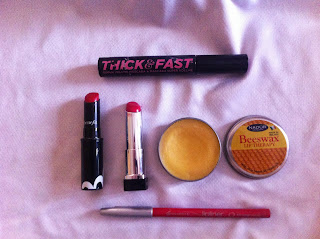 Mascara:  MORE Soap and Glory! I never ever wear fake lashes and with Thick and Fast I feel like I don't need to. The Brush is slightly Huge and on more than one occasion I have ended up with mascara on my face, but once I got used to it I was in Love.

Lipstick:  Flirt Alert was my first ever high end purchase and it is just Gorgeous. As you can see in the photo I use Red quite a bit, it just suits my colouring down to the ground, and it isn't drying.

Lipstain;  Ok the Revlon Lip Butter in Candy Apple is not exactly a Lip Stain but its just a gorgeous, naturally red that I can wear during the day that looks good and saves my lips during the cold

Lip liner:  For a girl that wears a Load of red lip colour I dont bother very much with lip liners as much as I should. Essences' Red Blush is the one I bought when I decided to start. it makes flirt alert last longer, and stops the colour from bleeding.

Lipbalm: Pennys finest lip treatment is really a life saver. Its very thick and you have to melt it with your fingers, and it smells lovely, and what's great is if you just throw it into your uniform tunic like me there's no way it will stain your pocket.

Email ThisBlogThis!Share to TwitterShare to FacebookShare to Pinterest
Labels: Benefit, Collection, Essence, Garnier, Make up, Real Techniques, Revlon, Sleek, Soap and Glory, Tag, The One and Only Tag, Urban Decay

As part of my dealing with stress at work thing (yay stress.........) it was recommended to me that I try out a reflexology session and see if that could help.
Reflexology, is an alternative medicine involving the physical act of applying pressure to the feet, hands, or ears with specific thumb, finger, and hand techniques without the use of oil or lotion.

It was explained to me that the feet are like maps to the rest of the body and that you can examine the body through massaging the feet. The week before I went to my appointment a woman I worked with went and was told she was going to get a chest infection as the reflexologist could feel the fluid build up in her lungs.

So I decided what the hell lets do this. 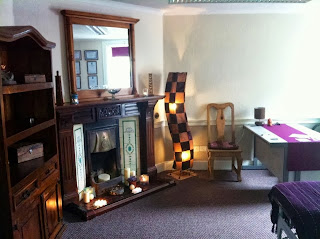 Soulistic Holistic Health Centre has opened up only recently and I just happened to walk past it and inquired about reflexology and got an appointment for that Friday. The office/treatment room was decorated with candles and purple and relaxed me when I walked in. The reflexologist explained everything and I left deciding I had made a good choice for dealing with my stress 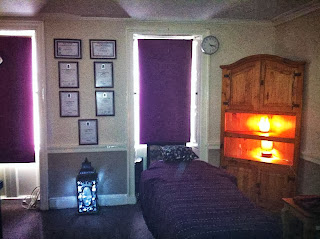 The reflexologist was very nice and reassuring. Oriental music was playing and the room was darkened. Before the massage she asked my questions about my lifestyle, diet and stress and any illnesses I may have.
The reflexologist started on my left foot and after a while wrote on a chart and continued onto my left foot. The foot that wasnt being massaged was covered in a towel and i was given a blanket. It was very relaxing and I almost fell asleep.

The session lasted about an hour and then after the time she discussed what she had found.            Surprisingly I was informed I had less issues than the normal individual.
My lymphatic system and right fallopian tube had arisen as parts of my body that needed attention, but all I really had to do was increase my water drinking and I'd be fine. After leaving I felt so so so relaxed I could have melted into the pavement. For the next few days my ankles did feel a bit weak but I asked and it doesn't seem to happen to other people. I found the session very relaxing which is what I wanted out of it. Instead of having it again though I might try the other massage options available, such as an Indian Head massage or even an aromatherapy massage. I would highly recommend getting a massage, particularly if you get stressed like me.
Posted by Unknown at 06:27 No comments: