I actually cannot believe this is my forth week in London.
There has been great aspects and some not so great aspects.

The not so great aspect includes the fact that I haven't been able to start the job I got,
I'm waiting on a letter from the police still. Thankfully I can start the job as soon as I get the letter and only today I've gotten a job in a pub, in Kentish Town. I did also have a trial in Canary Wharf in the fanciest place I've ever been in, not even worked, been in. It was enjoyable to see the view of the banks, but I know I was slightly over my head, just for small things, like the way the bottle should be facing and where the wine goes if you're eating rather than drinking. etc. It was a cool experience though and I didnt break anything which is a big deal for me.

Now onto the good things, Firstly Tinder. Has anyone heard of Nik Hampshire. While we didnt match up I saw him on it and it did make me far too excited. I have matched up with; a toy designer, a guy who worked on the Harry Potter film, British Soldiers, It's an all round adventure. 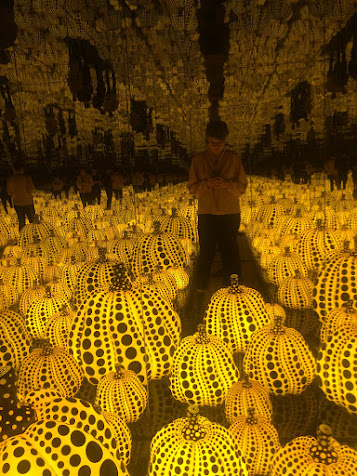 My best friend has been here for a couple of years and since I've been here, its been so fun, I've spent most of my weekends with her and sometimes during the week, We haven't lived this close in about 7 years. As much as being long distance besties was great being this close is just the bomb dot com. She'soff to Peru for two weeks on Friday so I can just meet her for coffee wednesday, the wonders of not having to get on a plane  to see your bestie.

So I was scrolling through Facebook as per usual, and I saw someone had visited London and seen a Yayoi Kusama Exhibition, and I decided I'd head to see her stuff too. There were three installation rooms and you have thirty seconds or so in each. the walls are mirrors so the pieces are fairly breathtaking. Also for some reason I've never been in Liberties before,its like being in a clothes shop in a Harry Potter movie. Oh yeah and Im just casually walking up Bond Street and there's an Andt Warhol exhibition on, as you do.

Finally food! My dad and I were in Camden to watch Ireland play football and then play rugby, we lost both lets not mention it. We were walking along a side street near the underground and came across Hook, a fish and chip shop, that started in Dublin, so of course we headed there. I had my first ever fish taco and it was amazing
Posted by Unknown at 15:05